Noh Play is a classical theater performance, consisting of Noh and Kyogen.
Before, it was known as ‘Sarugaku’, then changed to its current name since the Meiji period (1868-1912), and ‘Nogaku’ is still used until now. It has the history of more than 600 years, and highly valuated even in overseas. On May 18th, 2001, Noh Play has been registered as UNESCO Intangible Cultural Heritage.

Since the Muromachi period (approximately from 1336 to 1573), Noh was first introduced by Kanami, and his son Zeami. Kanami and Zeami were taking in the best from the conventional public entertainment, in order to build up another type of play consisting of stories.
Nowadays, the Noh Play you see on stage are the one that Kanami and Zeami left behind for us, which are still played without much changes since then.
(Today, Noh Play is inherited from its original since more than 600 years ago; yet its form does not change much.) One of the reasons is because of the love from the Daimyou (Japanese feudal Lord) of each historical period.

From the very beginning, the Noh Play of Kanami and Zeami were charmed by the famous politician named Ashikaga Yoshimitu (1368-1394) from the Kinkakuji Temple in Kyoto. After that, each Daimyo started falling in love with Noh Play also. Especially, a military commander named Toyotomi Hideyoshi (1537-1598) did really enjoy Noh Play. At last, he even turned his own heroic stories into a Noh Play and performed it. At the time of politician named Tokugawa Ieyasu (1543-1616), the influence of Noh Play was increasingly high evaluated, and even treated as Shogunate’s ceremonial music.

After the Meiji period, resulted from the collapse of Daimyou system in Edo period, many hardships were faced. However, thanks to the release of national isolation, Japan welcomed various foreign cultures into the countries, and took this chance to look again at its own culture. At this time, a politician named Iwakura Tomomi (1825-1883) used the word ‘Nogaku’ (Noh Play) to officially called Noh, and were really proud to introduce it to the world as Japanese traditional culture. 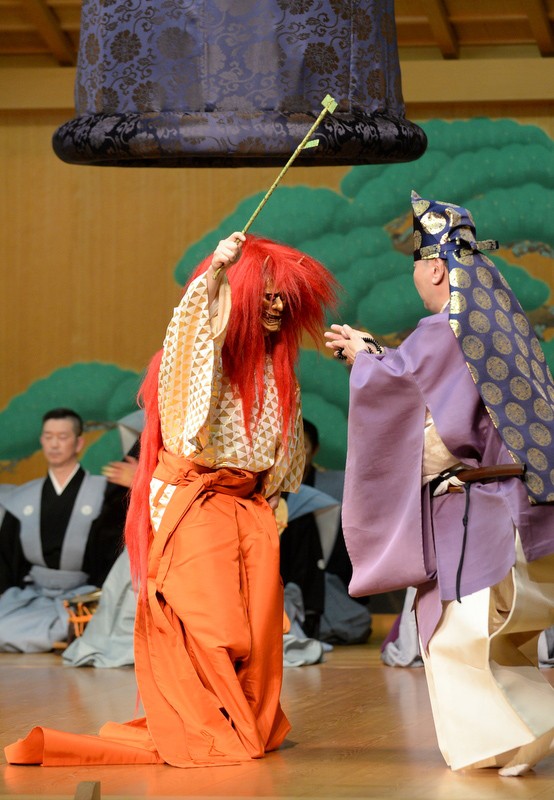 Noh Masks are used by the leading performer – Shitekata. Noh masks are various based on gender, age and whether one is a human character or not. Approximately, there are 60 different types of Noh masks, which are enough for all the Noh plays to be performed on stage. However, to be more specific, there are around 250 different types of Noh masks that can be introduced until now.
The significance about Noh masks is its change of face expression depending on the light. If the Shite looks up, the audiences can see the smiling expression, if the Shite looks down, the audiences can see the sad expression.

All the Noh performers wear Noh costume when they are standing on stage, which is known as luxurious and gorgeous Kimono. All the roles do not only wear different Noh costumes depending on their different roles such as women, samurai, Gods or demons; but the way they dress up their costume is also various. There are costumes that could be used only for a specific Noh performance.
Noh folding fans are used for practicing, for dancing, for Noh chorus, and for the ceremonial folding fan (when closing the fan, the first half is kept open) by the Shite. For different purposes of usage, the fans are designed distinctively depended on which character is going to use the fan.
Both Noh costumes and Noh folding fans have different design based on the various schools of plays.

The same with Noh Play, Kyogen was established since the Muromachi period as a performing arts.
Kyogen was known as a work of satire to make people laugh. It was taken in as noble and military family’s culture; yet its protagonists were performed by unknown government officials or people in town. Kyogen started as stories-telling, and soon later was highly welcomed by the mass of people. Nowadays, Kyogen has its friendly name as ‘The arts of laughter’.
There are two different types of Kyogen, which are ‘Honkyogen’ – the independent stories; and ‘Aikyogen’ – the shift between the two halves of a Noh Play.
Additionally, there are two schools of Kyogen, including Izumi, and Ookura. 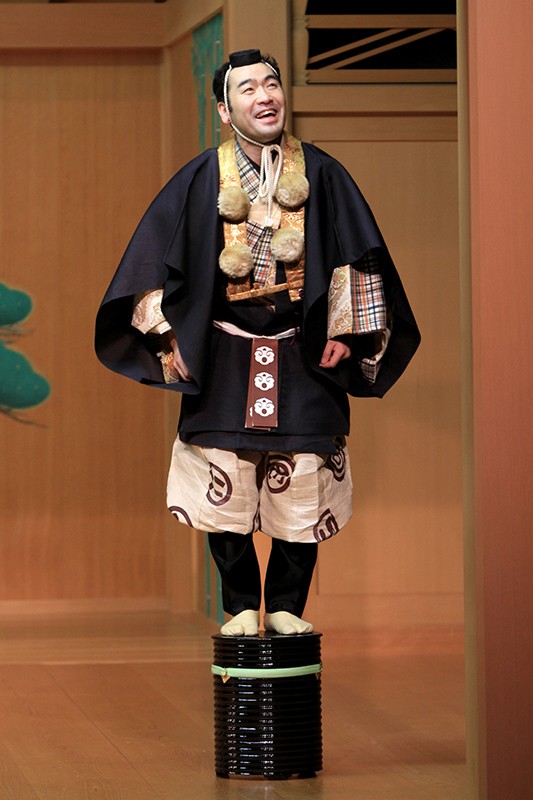 Many Kyogen plays do not use masks while performing. It is called ‘Hitamen’, means performing without a mask; yet Kyogen still has its specialized masks. However, if a character is not human, such as animals like monkeys and foxes; a mushroom fairy; a demon or a God…, they will wear Kyogen Masks.

Unlike dramas, Noh and Kyogen plays mostly do not use sets and props. Actions at a place and characters on stage are all explained by narration. Moreover, instead of using micros and speakers, the sound from talking and musical instruments are all raw voices.

About the pine tree on stage

At the back of the stage, always drawn an old pine tree, which is called ‘Kagamiita’. This was based on the legend said that in front of the ‘Yogo Pine tree’ of the Kasuga Grand Shrine (Kazuga taisha) in Nara prefecture, danced the Kasuga Great Gods.
Moreover, because Noh stage does not use any kind of equipments, the image of evergreen pine trees are drawn everywhere in the background of the stage throughout the four seasons, as a natural background.
The pine tree of Heiwa Shimin Park Noh Theater was designed by an artist named Tagawa Susumu from Kitsuki city. 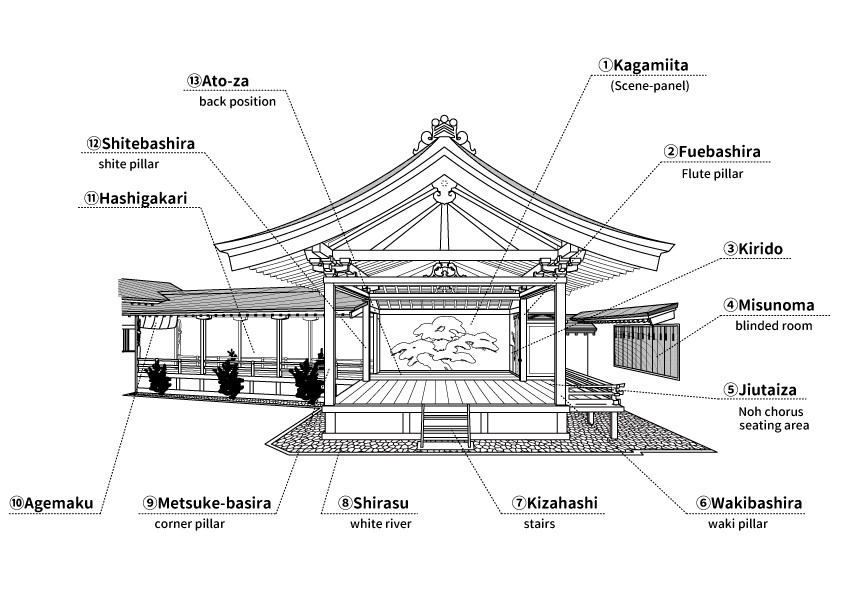